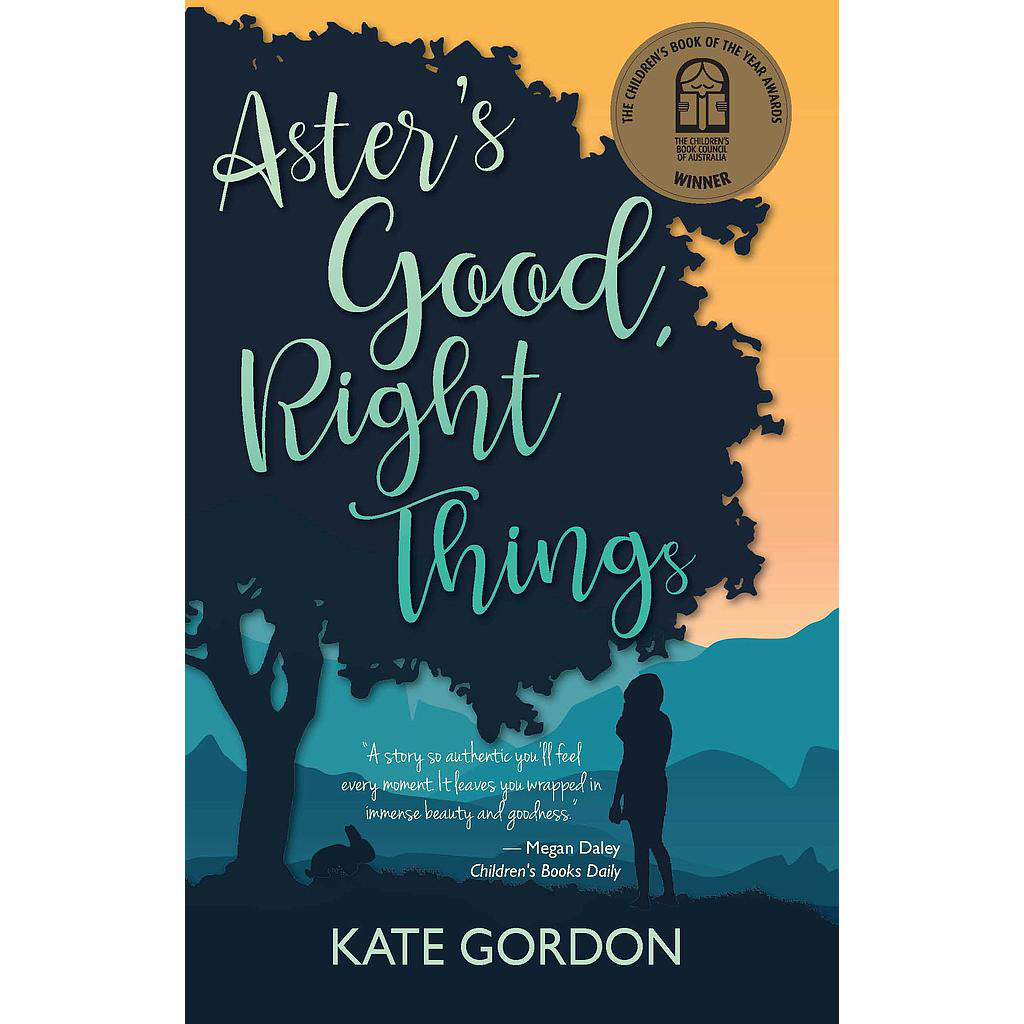 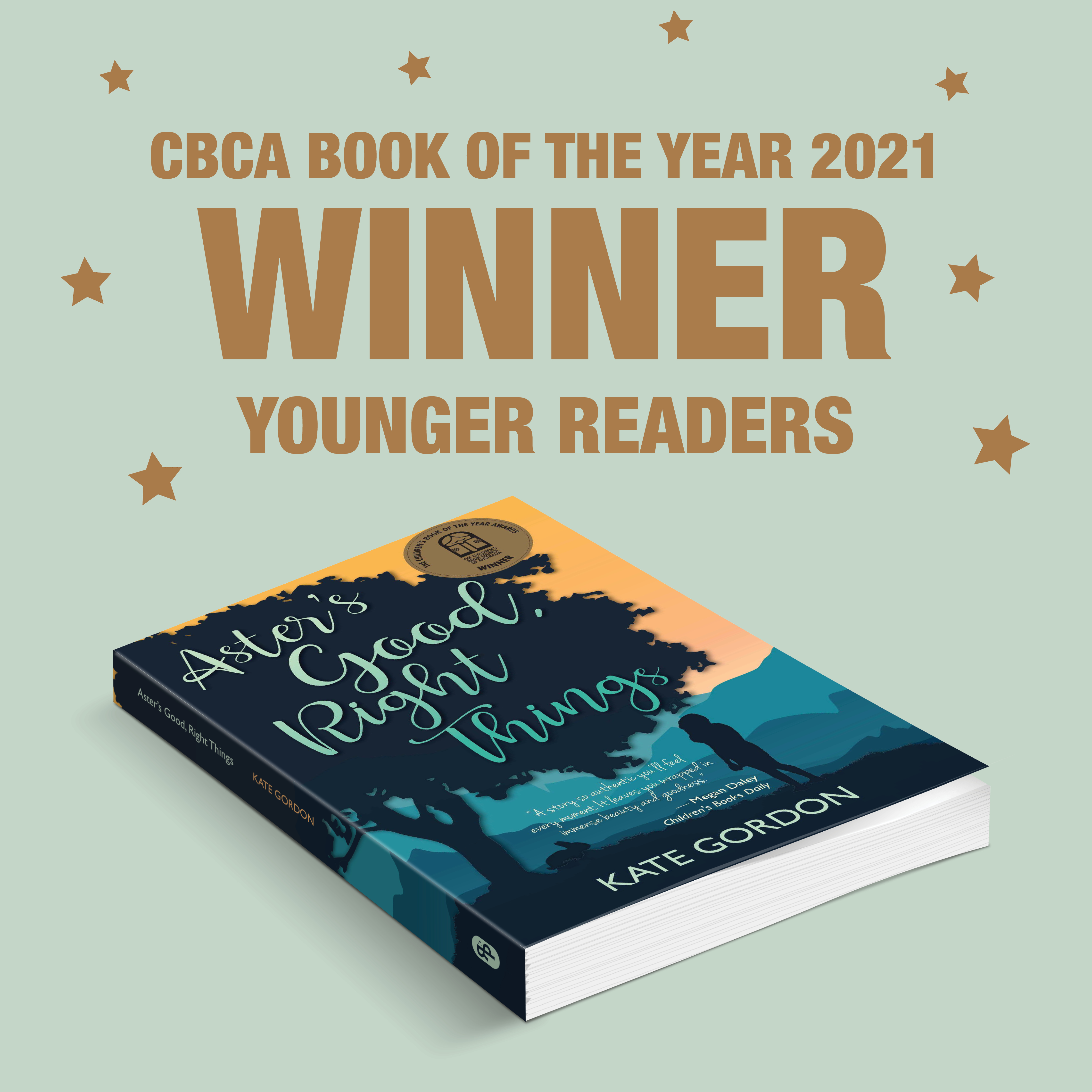 WINNER OF THE CBCA BOOK OF THE YEAR 2021 - YOUNGER READERS

I can’t let go of them – the good, right things—because if I do I’ll turn into a cloud and I’ll float away, and a storm will come and blow me to nothing.Aster attends a school for gifted kids, but she doesn’t think she’s special at all. If she was, her mother wouldn’t have left. Each day Aster must do a good, right thing—a challenge she sets herself, to make someone else’s life better. Nobody can know about her ‘things’, because then they won’t count. And if she doesn’t do them, she's sure everything will go wrong. Then she meets Xavier. He has his own kind of special missions to make life better. When they do these missions together, Aster feels free, but if she stops doing her good, right things will everything fall apart?

Activity worksheets for this title are available from:

Eleven-year-old Aster lives in a small town in Tasmania with her father, a senior school principal who calls her ‘Petal’ because of her floral name. Her mother, Ivy, has recently abandoned the family, and Aster, who has an anxiety disorder, believes it was because Ivy wished that Aster was more ‘normal.’

Aster attends the Albatross School, a local school for gifted children with an alternative discipline policy and a strict ‘Healthy Bodies, Healthy Minds’ lunchbox policy. Many of the students are gifted, but students with learning difficulties, like Indigo Michael, also attend.

Aster feels that compared to Flynn Blumenthal, an Indigenous classmate she is certain is going to be the Prime Minister someday, and Annaliese, who sings like an angel, she isn’t destined for greatness. All she feels capable of is writing her good, right things in her notebook. Aster believes that if she does good, right things — nice things that she does every day for other people, without expecting anything in return — nobody else in her life will leave her. She takes punishment for other kids at school, smilingly accepts the wrong order from Esme — the punk ice-cream shop assistant she admires — and doesn’t tell her dad what she’d really like for tea.

When Aster finds a rabbit in the school grounds’ rose bushes, she names her Hollyhock. While visiting Hollyhock, she meets Xavier — a boy who lives in the cottage next to her school. Xavier, she learns, is homeschooled because he struggles with depression. Xavier works hard to find and share joy — he wears princess pyjamas to annoy his mum, convinces people to do interpretive dances to the kazoo in the main street of town, and encourages Aster to start putting herself first.

Aster is close with her Aunt Noni, Ivy’s sister. Noni also encourages Aster to do things that make her happy, like watching animated movies, eating non-approved food occasionally, having fun and being loud, but Aster can’t allow herself to.

Noni, who doesn’t have children of her own, also acts as a foster carer, and takes in Indigo Micheal — who bullies Aster at school and calls her a ‘lunatic.’ Indigo was taken from her mother’s care due to neglect. Throughout the novel there are flashbacks to when Ivy was still around. Aster realises how selfish, and sometimes cruel, her mother was to her. She and Indigo bond over the fact that, while they may still love them, their mothers were actually not very good at mothering them.

When Indigo runs away, Aster blames herself for not being ‘good enough.’ Thankfully Aster is fairly sure she knows where Indigo might be, and she is safely brought home. Indigo apologises to Aster for her past behaviour and asks to be her friend. Xavier returns to hospital due to his depression, but promises that he, Indigo and Aster will all be friends when he returns.

When Ivy finally calls, Aster chooses not to speak to her, so her father takes the call in her place. He tells Aster that her mother won’t be coming home— ever—she is expecting a baby with her new partner. In that moment, Aster decides she no longer needs to do her good, right things anymore; instead she’ll do things that feel good, and that she knows are right, for other people but also for herself.

The core of empathy and understanding that powers this book takes dark themes — grief, neglect, isolation, and mental illness — and weaves them into what is ultimately a happy and hopeful tale. We see through Aster’s eyes that everyone is struggling with something: the grumpy school librarian isn’t bitter and sour for no reason — she’s still grieving the loss of her son; spiky, scary school-mate Indigo isn’t mean and nasty to Aster for no reason — she’s been terribly neglected and let down and is insecure and angry with the world for it. Your heart breaks for Aster as she struggles to understand unconditional love, but her happy ending — learning to put herself first and be honest about her needs — is uplifting and cathartic. Overall, a truly excellent read. 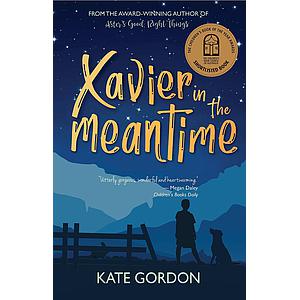 Xavier in the Meantime