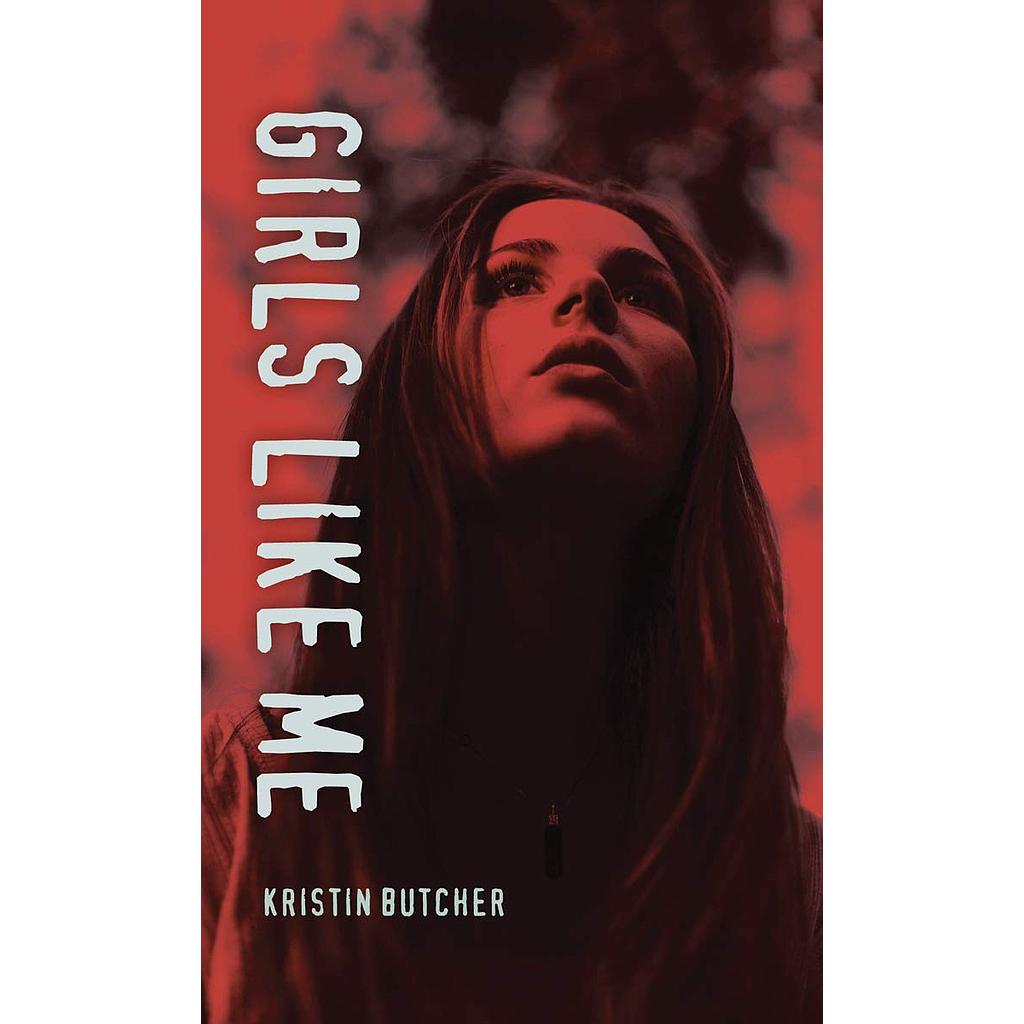 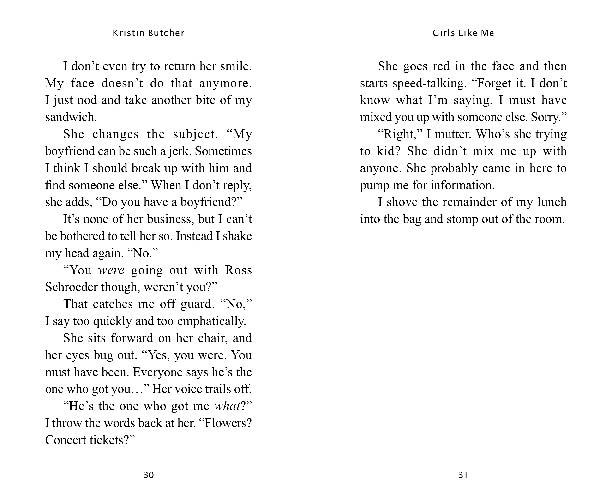 https://bookstores.novelladistribution.com.au/shop/product/9781459820555-girls-like-me-orca-soundings-80098
After accepting a ride home, 16-year-old Emma Kennedy is raped by a boy from school. But handsome, popular Ross Schroeder tells everyone the sex was consensual, and Emma is immediately branded as a slut.
Even Emma's best friend, Jen, doesn't believe Emma's version of events. In fact, she is angry with Emma because she feels betrayed. After all, she liked Ross first. But when Ross starts showing interest in Jen, Emma knows she will have to find a way to get Jen to believe that she really is in grave danger. Before it's too late.

Emma loves volleyball and hanging out with her friends, not to mention the boy she's crushing on, Ross. Her life is perfectly normal. And then, one night, after offering her a ride home, Ross pulls over to a secluded road and rapes her. She falls pregnant as a result and suffers a miscarriage.
Word spreads around school that Emma made Ross have sex that night in the car and then fell pregnant. She's labelled the school slut. Even her best friend Jen doesn't believe her version of events. Her doctor thinks she's gotten herself into trouble and the miscarriage was her fault. Her father doesn't want to hear about it and her mother keeps asking her if she's sure she didn't lead Ross on a bit. Emma feels totally alone, and wonders if life will ever get back on track.
Then she finds out that Ross is flirting with Jen -- his next target. Emma tries to warn her friend, but Jen doesn't believe her; she thinks that Emma's just jealous that she and Ross are together. When Ross rapes Jen and she runs to Emma, she realises that the two of them together have more power than just one. Then they're contacted by someone who witnessed what happened to Jen -- someone who's willing to back them up if they report him to the police. Emma and Jen decide to tell the police what happened to them.
An eye-opening read. Emma's horrible experience, the isolation she feels afterwards as no-one believes her, and the healing process that begins when Emma and Jen come together again as friends, are all too common. Details like the boy who witnessed Jen being assaulted and decided not to interfere, or the lack of sympathy from the doctor, unite to create an uncaring and unsympathetic world. But hope appears when Jen and Emma are supported by Jen's parents and the same boy who abandoned Jen earlier. This is a simple and straightforward way to illustrate the difference between cruelty and inaction, and the importance of standing up for what's right.

1. Emma has a miscarriage; description of blood soaking her bedsheets (p. 1). Emma remembers fighting back when she was raped, but the act is not described (p. 15). Emma is pregnant (p. 15). Emma sees a crude drawing of a girl and a guy having sexual intercourse (p. 24-25). Jen calls Emma easy; everyone knows about her pregnancy and subsequent miscarriage (p. 35-37). Mention that the school councillor is on the lookout for signs of abuse (p. 41). Emma discusses relationships, sex, consent and sexual abuse with the school councillor (p. 45-47). Emma tells her mother that she was raped; her mother blames Emma, telling her she dresses "provocatively' (p. 70-75). Emma tells Jen that she was raped, but Jen doesn't believe her; they discuss her pregnancy and miscarriage (p. 79-82). Jen tells Emma that she was raped by Ross (p. 106-107). Emma and Jen discuss Jen's rape; Jen describes the events leading up to it and where she was, but not the act (p. 111-114). A note from a witness referring the assault he saw (p. 127). Discussion of sexual intercourse, first times and rape (p. 129-131). 2. Language: slut x 1. Ross uses the word "f*cked" to describe raping Emma (p. 84-87).