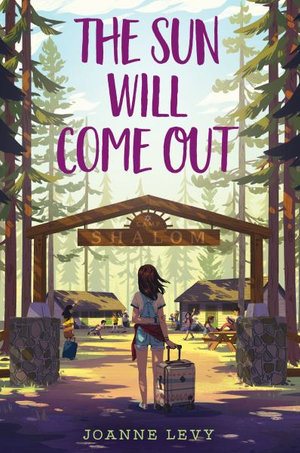 The Sun Will Come Out

Twelve-year-old Bea Gelman and her best friend Frankie are planning the BEST SUMMER EVER at Camp Shalom—a sleep-away camp. But at the last minute, Frankie bows out, leaving painfully shy Bea on her own. Just talking to strangers causes Bea to break out into ugly, blotchy hives. As if the hives weren't bad enough, Bea gets pranked by a couple of girls in her cabin and is betrayed by someone she thought was a new friend. Bea has had enough! She decides to spend her summer in the infirmary far away from everything that’s stressing her out. No more boys (including her crush, Jeremy), no more horrible mean girls, and no more fake friends! At the infirmary, Bea meets Harry, a boy facing challenges way more intense than stress breakouts. Inspired by Harry’s strength and positive outlook, Bea decides to face her fears—in a big way.

The Sun Will Come Out is a funny and heartwarming account of a shy girl’s first summer away from home, where she learns she really can do anything and that silver linings can be found just about anywhere.

Twelve-year-old Bea’s really looking forward to going to Camp Shalom with her best friend Frankie this summer—right up until Frankie tells her that she’ll be going to the Circle M camp instead.

Bea is devastated. She desperately wants to go to Circle M, which is a horseriding camp that she and Frankie had planned to go to together. She feels betrayed that her so-called best friend is going to leave her to go to Camp Shalom by herself. She had originally been excited about Jewish summer camp, but now the only person she’ll know is Frankie’s older brother Jeremy, who Bea has an enormous, embarrassing crush on. To make matters worse, she’s now developing stress-activated hives on her face.

Her first day at camp starts well and she makes instant friends with an Irish girl her age called Regan. But the appearance of two mean girls—Samantha and Carly—puts an instant damper on things as they nickname Bea “spotty” and tease her about her crush.

Bea’s excited to find out that Camp Shalom puts on a musical each year, and this year they’re doing her favourite—Annie. Regan convinces Bea to try out, but Bea intends to tank the audition by pretending to sing horribly so she doesn’t have to perform in front of people. She doesn’t get to the audition though—Jeremy asks her for advice on how to get Regan to like him, and Carly and Samantha tease her, so she runs away in embarrassment.

At the infirmary, while seeing the nurse about her hives, Bea meets a boy called Harry. Harry has no hair and at first Bea can’t tell how old he is. She thinks he might have cancer, but he later reveals that he has a genetic disorder called progeria. The other kids tease him for his looks, which is why he hides in the infirmary. Bea later discovers that people with progeria have an average lifespan of 14—and Harry, who is 13, knows that any day could be his last. Bea’s devastated, but she’s amazed by his bravery.

When Carly tells Bea that she saw Regan kissing Jeremy, Bea is furious. However Harry helps her to realise that instead of jumping to conclusions she should actually talk to her friend about it. Regan explains what really happened and the two girls are reconciled. Regan starts spending more time with Bea and Harry.

Bea is helping Regan prepare for the role of Annie when, out of nowhere, Regan’s grandmother has a stroke and she has to leave camp. Bea takes over the role of Annie, where she wows the audience—including Harry, who has never attended one of the performances before. Bea, Harry, and Regan stay in touch after summer camp ends. Bea makes up with Frankie and is delighted to find herself with so many loving friends. The whole drama with Jeremy feels like an afterthought compared to her new bravery on stage.

Sweet and light-hearted, this book tackles some serious topics in a friendly and approachable way. Harry’s feelings about his disorder are nuanced and real, and while Bea’s reactions to his condition aren’t always the most understanding, they come from a place of acceptance and she treats him like a “normal” friend. There are references throughout to concepts from Judaism—like Ben’s Friday night services, which discuss kavod (honour and respect) and ometz lev (courage)—or the food at the camp being kosher. It’s wonderful to see Bea come out of her nervous shell and make real friendships, leaving her crush to the side in favour of kids her age she gets along well with. Though crushes are present, they are fleeting and don’t lead to romance. The real core of the novel is in the bravery and care that these friends show one another, and their perseverance in the face of the bullying and teasing they face from others—who, like Carly and Samantha, end up much less happy.