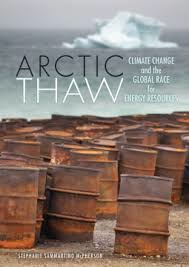 "Ice in the Arctic is disappearing‚Äîand opportunity is calling. As climate change transforms the top of the world, warmer conditions are exposing a treasure trove of energy resources previously trapped in ice. The Arctic's oil, natural gas, minerals, and even wind and hydroelectric power are becoming more accessible than ever before. With untold riches hanging in the balance, the race is on to control the Arctic and its energy potential. Oil companies vie for drilling rights that go to the highest bidder. Nations around the globe‚Äîwhether they're on the Arctic's doorstep or half a world away‚Äîhope to claim territory for themselves. And the indigenous peoples who have called this region home for thousands of years are determined to be on the ground floor of its development. But the Arctic's new possibilities come with grave risks. The pursuit of oil and natural gas threatens to further damage the Arctic's fragile ecosystems and accelerate global warming worldwide. International disputes over who owns which pieces of the Arctic could bring countries to the brink of war. The fate of the entire planet may hinge on how far people are willing to go to tap and control the Far North's energy resources. From oil rigs to military bases, the Arctic has never before hosted so many warring interests, and the stakes have never been so high. Join Stephanie Sammartino McPherson on a journey to the Far North to explore the energy controversies that will decide the future of the Arctic‚Äîand of the earth."