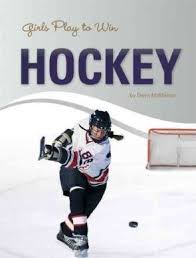 How would you like to score the goal that wins an Olympic gold medal? Thanks to pioneers like Cammi Granato, Karyn Bye, and Angela Ruggiero, you now have that opportunity. These women played with the boys before girls had their own hockey leagues. Now that they have paved the way, girls hockey is more popular than ever. Grab a stick - now it's your time to shine! The history, the rules, and the heroines: these nonfiction accounts of women's sports relate the interesting insights of each sport, including the rules, game play, and standout athletes. Girls looking for role models as well as the "hows and whys" of their favorite game will find the answers in these fresh, accessible titles. Part history, part biography, and part instruction, Girls Play to Win allows readers to access "everything they want to know" about the game. More than an introduction, this series takes what is likely an existing interest and allows the reader to delve deeper. Content consultants are real-world experts that include Olympic athletes and coaches. Library Media Connection Editor's Choice