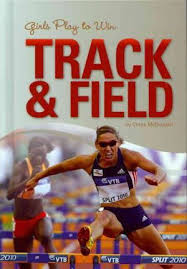 We run, we jump, we throw. In track and field, we do it all! Also known simply as athletics, track and field is the oldest and most natural of sports. It's also one of the most exciting. Stars such as Babe Didrikson, Wilma Rudolph, and Jackie Joyner-Kersee have been pushing limits - and breaking - records - since women were first allowed into the Olympic Games in 1928. Now it's your turn to take it even further. In such an amazing sport, the possibilities are endless! The history, the rules, and the heroines: these nonfiction accounts of women's sports relate the interesting insights of each sport, including the rules, game play, and standout athletes. Girls looking for role models as well as the "hows and whys" of their favorite game will find the answers in these fresh, accessible titles. Part history, part biography, and part instruction, Girls Play to Win allows readers to access "everything they want to know" about the game. More than an introduction, this series takes what is likely an existing interest and allows the reader to delve deeper. Content consultants are real-world experts that include Olympic athletes and coaches. Library Media Connection's Editor's Choice