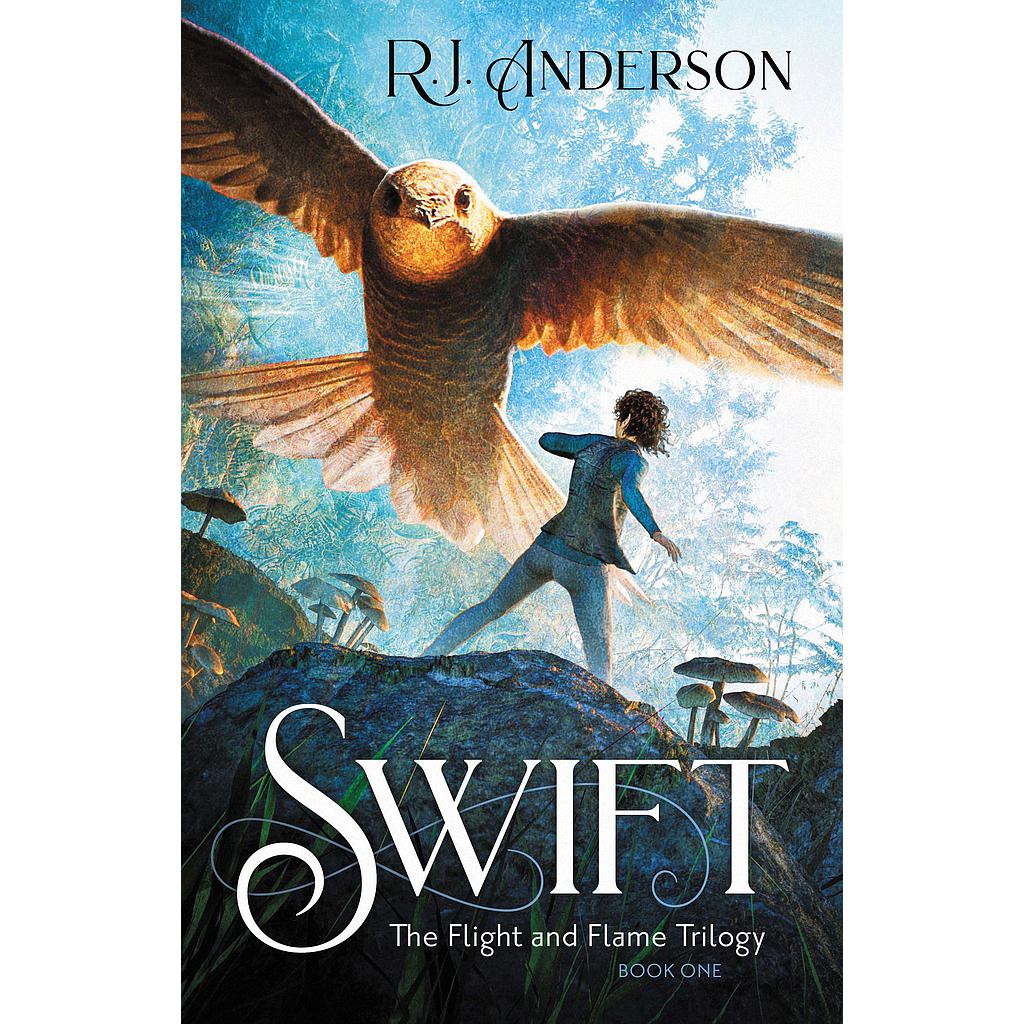 https://bookstores.novelladistribution.com.au/shop/product/9781621841760-swift-1-111695
As a piskey girl born without wings and raised underground, Ivy yearns for flight almost as much as she misses her long-lost mother. But the world outside the Delve is full of danger, and her dreams seem hopeless until she meets a mysterious faery who makes her an enticing offer: If Ivy helps him escape the Delve's dungeon, he'll teach her how to fly.
Freeing Richard could cost Ivy her reputation, perhaps even her life. But when her fellow piskeys start to disappear and her beloved little sister goes missing, Ivy has no choice but to take the risk.
Deadly threats and shocking revelations await Ivy as she ventures into a strange new world, uncovers long-buried secrets about her family's past, and finds that no one -- not even herself -- is entirely what they seem.

Piskeys, small Cornish fairy folk, live in forests and abandoned mines. They're afraid of the world outside -- and seemingly with good reason. Spriggans pick off the Piskeys who stray too far from the safety of the Delve. Consequently, Betony, the head of their small community, urges her people to keep to the shadows.
Ivy is a Piskey born with no wings. She has every reason to fear the outside just as much as the others, since her mother was taken by a Spriggan six years ago. But she also wants to know more about the world beyond her sheltered community. When she ventures above ground again she's almost taken by a Spriggan herself, but the Piskeys capture him.
His name is Richard, and he tells her that he's been sent to find her by her mother, who is alive. He offers to teach her how to fly. The two things she wants most in the world are being offered to her by someone she's been taught to hate and fear. When people start to disappear, she knows she has to accept his help.
They escape, and Ivy soon learns that everything she knows of the world is wrong. First, Spriggans have disappeared from the area -- so something else must be responsible for the Piskey disappearances. Richard is a Faery, not a Spriggan. Second, she can shapeshift; a discovery that implies there's a secret in her bloodline, as that's not a Piskey ability.
Richard introduces Ivy to his friend Molly, tells them that Ivy's mother is living in a nearby town, and then disappears with no explanation. Luckily, Ivy is able to disguise herself as a human to locate her mother with Molly's help. When she finds Marigold, everything seems to be falling into place: her mother reveals that she's a Faery, like Richard, and that Ivy is wingless because of her blood. This is why she can shapeshift. But Marigold is hiding something: her reasons for leaving her family behind in the Delve, which she insists is poisoning their people, don't add up.
Things come to a head when Molly's mother reveals herself to be another Faery. Due to an ages-old conflict over lands, Gillian has been picking off Piskeys from the Delve. A desperate confrontation with Gillian in the Delve is averted at the last moment, and Gillian doesn't survive. But Ivy knows the problem runs deeper than Gillian -- after all, Betony had been lying to the Piskeys about Spriggans in order to control them for decades. She confronts Betony, who reveals that she had cast Marigold out and forced her to swear never to speak of it. Marigold's reticence finally makes sense.
With the immediate crisis of the Delve averted, Ivy is unsure what to do next. The mixture of Faery and Piskey blood in her veins means she doesn't have a place in the world. But Richard reappears and it seems that he's in a similar position. He reveals that his real name is Martin, and Ivy resolves to help him investigate what really happened to the Spriggans -- and find her place in the world along the way.
This fantasy adventure is full of twists and turns. The setting and worldbuilding of the magical world incorporate elements of Cornish folklore and the aesthetics of Cornwall in the 1800s. Ivy's metamorphosis from a Piskey without wings to a powerful Faery is a comment on hidden potential and the importance of acceptance -- both from others and yourself. The discussion of bloodlines and cultural differences, especially in reference to Gillian's campaign against the Piskeys, sparks discussions about bigotry and xenophobia. Betony's control of the Piskeys through her manipulation of the narrative of the Spriggans is absolute. This is a relevant metaphor for propaganda and unbalanced power structures. This series integrates aesthetics similar to The Chronicles of Narnia.
Recommended for fans of Holly Black and Cornelia Funke looking for a new series focusing on faeries in the modern world.

1. Fantasy style magic: Piskeys, Spriggans and Faeries with the power to shapeshift, cast "glamours" and blood-based spells similar to those used in Narnia. 2. Some non-graphic violence and off-page death (p. 196, 205, 238, 258).