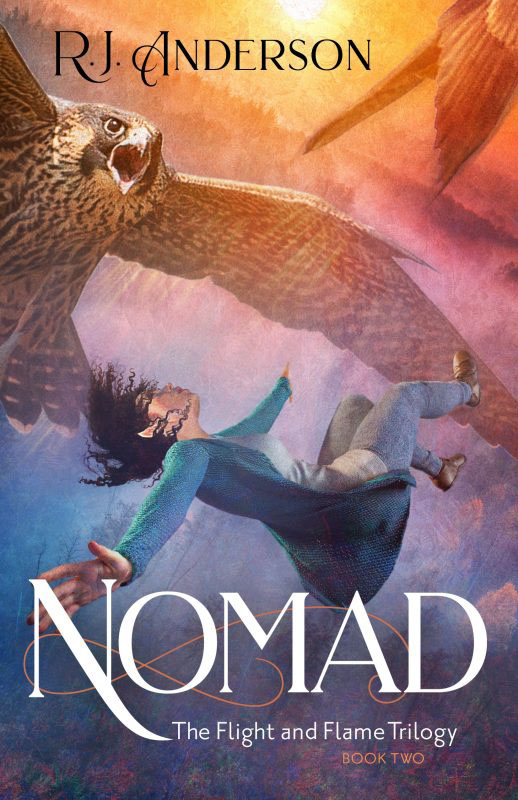 https://bookstores.novelladistribution.com.au/shop/product/9781621841784-nomad-2-112347
Banished from her underground home by Betony, the queen of the Cornish piskeys, young Ivy sets out to forge a new life for herself in the world above. But a deadly threat lingers in the mine, and Ivy cannot bear to see her people suffer while Betony refuses to believe. Somehow she must convince the queen to let them go.
Her mission only becomes more complicated when Ivy starts to dream of the ancient battles between her ancestors and the spriggan folk. Who is the strange boy in her visions? Could her glimpses of his past help Ivy find a new home for her fellow piskeys?
To find the answers, Ivy must outfly vicious predators, outwit cunning enemies, and overcome her own greatest fears. And when evil threatens the people Ivy loves best, it will take all her courage, faith, and determination to save them.

This second book in the Flight and Flame Trilogy picks up where Swift left off. Ivy, banished from her home of the Delve by her Joan, is on the run. She's travelling with Martin, hoping to help him solve the mystery of the missing spriggans so he can be reunited with his family. But the outside world is dangerous. Ivy, in her Swift form, is attacked by a larger bird. She's too frightened to shapeshift again until she can turn into a peregrine falcon, safe from harm. But something's stopping her from learning how.
She visits with Jenny in the Delve, hoping for news on her community. The Joan is just as determined as ever to keep the Piskeys underground and safe from the Faeries, ignoring the way it's poisoning her people. But Ivy doesn't have the power to free them yet.
Meanwhile, she's been having strange dreams of a Spriggan boy from long ago--at the beginning of the conflict between Piskeys, Spriggans and Knockers that has wiped the Spriggans out. She's not sure how this is related to her search, but the treasure they find based on her dreams helps them to rent Molly's house from her when she moves away.
Martin discovers when selling the treasure that the seller knows of another Spriggan, and resolves to track him down. While he's away, everything starts to crumble. The Joan attacks Marigold, burning her terribly; Martin is the only one Ivy knows who can help. She tracks him to the treasure merchant, but he only has bad news. The spriggan he tracked down, Walker, owed a life debt to the treasure buyer--not just him, but three generations of Walker's family. Martin is now bound to obey his every whim, and can't leave the shop to save Marigold. But he tells Ivy to go to the faeries for help.
As she does, her desperation allows her to focus on her destination more than her transformation; she shifts into a peregrine form. It's hard to convince them to heal her mother--bad blood runs deep between Marigold and the other fairies--but offering Martin's location in return convinces them, and Ivy returns to Marigold with a healer in tow. But she's too late. Enraged and desperate to avenge her mother, Ivy returns to the Delve to face down against the Joan. An altercation ensues that hangs on a knife's edge. At first, Betony has control of the situation, but more Piskeys side with Ivy than she accounted for--they too can see the poison hurting their community. Betony escapes in the struggle.
Ivy returns to Molly's house to find that her mother has been revived by human medicine. Some of the Piskeys join her, and she becomes a de facto leader. Best of all, Martin is pardoned by the Faerie Queen. Ivy realises that he's the boy she'd been dreaming of--a Spriggan sent forward in time by hundreds of years. He's not related to Walker, which means that he's still no closer to solving the mystery of the Spriggans' disappearance, but at least he's now free.
This is a thrilling and transporting read. The setting and plot are reminiscent of old-fashioned adventure stories like Narnia. The romance between Ivy and Martin is developed slowly and naturally. As they both learn more about themselves and one another, their trust deepens. Most importantly, Ivy's trust in herself, her resilience and tenacity, make her a highly enjoyable protagonist.