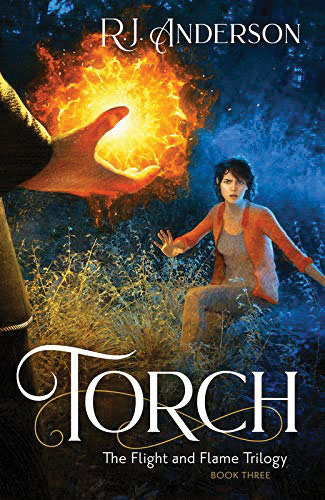 https://bookstores.novelladistribution.com.au/shop/product/9781621841814-torch-3-112901
How do you fight fire without fire?
When a freak storm uncovers the entrance to a mysterious underground chamber, Ivy and Martin expect to find treasure. But what they discover is even more valuable: a barrow full of sleeping spriggans, magically preserved for centuries. With the vengeful piskey queen Betony determined to capture Ivy and her followers, the secret hideaway could be key to both their peoples' survival.
But the piskeys and spriggans are ancient enemies, and when Ivy tries to make peace her own followers threaten to turn against her. Plagued by treachery, betrayal and desertion on every side, Ivy must find a way to unite the magical folk of Cornwall--or doom herself, Martin and everyone she loves to death at Betony's hand.
Yet without the legendary fire-wielding power that marks a true piskey queen, can Ivy convince her people to believe?

This final book in the Flight and Flame trilogy, Torch picks up where Nomad left off. Ivy has exposed their leader Betony's true nature and the danger of staying in the Delve. She's won the begrudging trust of the other Piskeys. But Martin is no closer to finding the other Spriggans, and the Piskeys need somewhere to live now that they're abandoning the Delve. The Piskeys may have sided with Ivy, but she's not their leader.
Piskey leaders--known as "Joans"--have the power to control flame, a power Ivy doesn't have. She tries to trick them using petrol and matches, but the deception won't last. As she tries to keep them on her side, she submits to demands to banish Martin, in the hope of protecting him. Together, they discover a long-lost barrow, with 30 sleeping Spriggan children inside. They're both overjoyed, as are the children--as the son of the Gray Man, Martin was prophesied to save their people. But though the barrow is plenty big enough to house Ivy's people, the Spriggans who live there complicate matters. The Piskeys are still xenophobic and proud, and even when Betony attacks with an army of Piskeys, they refuse to accept Martin's help. Their suspicion about Ivy's lack of power turns to all-out mutiny, and Ivy is forced to step down.
In the final showdown, Ivy puts everything on the line: she allows the Joan to burn her. Betony was using illusions to make it seem as though she still had a Joan's power. It must have left her when she burned Jenny years ago--a cruel and selfish act. But to Ivy's surprise, her act of sacrifice calls the power of a Joan to her, and Betony is incinerated. Ivy's people have seen her wielding the power of a true leader. They unite under her and Martin, and with the Spriggans' help, they set about making the Delve liveable again. Life isn't easy, but they have hope for a peaceful future.
A satisfying conclusion to a spellbinding story. The lessons Ivy learns about leadership, bravery, and self-sacrifice over the course of the book are the perfect progression to her character arc. The relationship between Martin and Ivy is sweet and based on mutual respect, while Ivy's relationships with her people and her family signify her growing strength of character. The aesthetics and setting will make readers nostalgic for an old-fashioned adventure story. A highly enjoyable read.