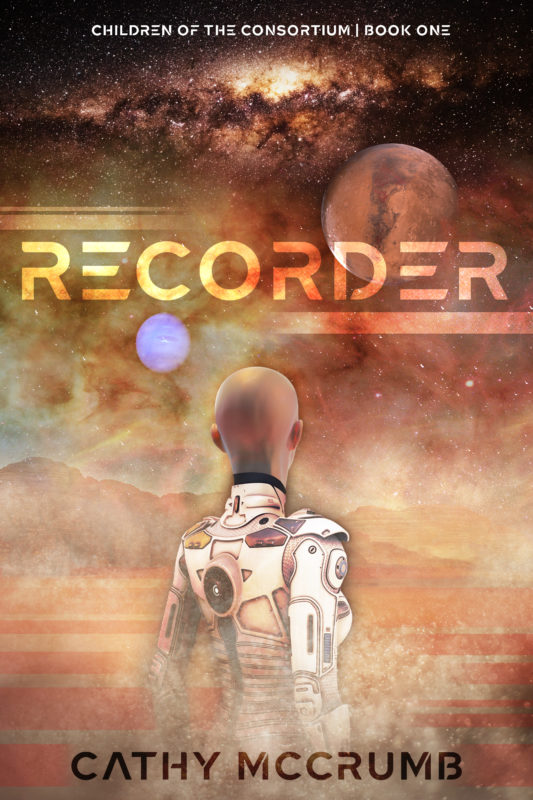 The Consortium is All. But Recorder Can No Longer Obey. Recorder has no family, no friends, and no name. Donated to the Consortium before birth, her sole purpose is to maintain and verify the records. A neural implant and drone ensure compliance, punishing for displays of bias. Suddenly cut off from controlling technology, Recorder tastes what it means to be human. But if the Consortium discovers her feelings, everyone she knows will be in danger. With no name, no resources, and only an infinitesimal possibility of escape, Recorder’s time is running out.

Recorders are humans that are stripped of emotions in order to neutrally observe, report, and assess the activities of all other citizens so they can “protect” them. They’re not allowed to interact with the citizens without permission and are kept in line by the Elders and their drones. Citizens and Recorders live together but separate, each understanding their role in society controlled by the Consortium.

Recorder (the protagonist) is aboard the Thalassa in Consortium quarters. Her first assignment is a mission to record what happened to a research station on a planet that went dark two years previously after a biohazard alert. There is a rescue contingent, but the crew believe most of the station’s occupants are already dead. Recorder is tasked with documenting the operation and retrieving the body of the station’s Recorder and her drone.

When they search the station, they find survivors in stasis in the medical bay. They find the bodies of the Station Direction and Director of Research. Recorder’s emotional response to the bodies results in a “reprimand”—an electric shock—by her drone. They encounter a giant two-metre-long cockroach, which destroys Recorder’s drone. Timmons, one of the citizens, kills the cockroach.

The destruction of the drone seems to have shocked Recorder’s neural implants. She collapses and they strap her to a pod to take her back to the shuttle. Dr Maxwell (aka Max), takes her to the infirmary. Kyleigh is one of the station survivors in the stasis pods, and she thanks the Recorder for saving them. Max tells Recorder that her implant is gone—he had to remove the damaged chip and wiring form her brain. She is no longer a Recorder.

Nobody has ever saved the life of a Recorder by removing their chip, and Jordan believes Max will be punished for doing so. Recorder believes that the Consortium will show him gratitude. Without her implant, she Recorder beings to feel emotions. Timmons stays by her bedside to comfort her.

Recorder begins to warm to the citizens, who gradually befriend her. She grows particularly close to Nate Timmons. The crew members tell Recorder of incidents with their families—including family members that have gone missing—that have led them to distrust the Recorders.

They analyse the data collected from the station. The Security Chief and Dr. Johnson were the first to succumb to the illness, which killed seventeen more people. Two days after the first person fell ill, the Director put the remaining four into stasis. Kyleigh’s father, Dr. Tristram, was murdered before the outbreak began, and no one had the chance to investigate it.

Recorder scans the security footage from the station and finds that someone has deleted part of the feed when Dr. Tristram died. She can hear him worrying about something that isn’t right and call out “Who’s there?” before he slumps. Recorder learns that Tristram was working on something he wasn’t supposed to be. The station was researching nanodevices and viral therapies, but someone has been experimenting outside of this scope …

The first in a trilogy, Recorder is a wonderful sci-fi debut exploring identity and what makes us human, our empathy for and connection to others. The mystery element to the story is engaging, and the worldbuilding is satisfying. A cliffhanger ending will leave readers wanting more.

1. Mild kissing/romance (p186/187, 196, 300, 349). 2. Elliott kisses Recorder without her consent. 3. Brief mention of a couple living together, however in the world depicted, marriage doesn’t really exist. Couples enter into a ‘contract’ that lasts for a specific length of time instead. 4. Non graphic infrequent violence.