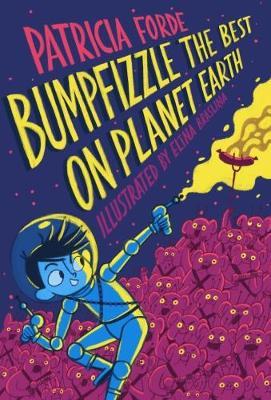 Bumpfizzle the Best on Planet Earth

Bumpfizzle is an alien sent to Earth on a mysterious mission from Planet Plonk. Or is he a ten-year-old boy who is jealous of all the attention his parents are giving to The Baby? "So hilarious! Patricia Forde is definitely the high queen of Irish comedy." — Eoin Colfer, author of Artemis Fowl Bumpfizzle is on a mysterious mission to Earth from Planet Plonk. His Earth family is OK. Except for the four-legged brother (Mr Sooty) and The Baby – which leaks from both ends. Bumpfizzle’s confusion at Earthling behaviours, as reported in his diary and his frequent reports back to Plonk, are hilarious, and his adventures are ridiculous, from eating the cat’s food (it makes him throw up, always good for attention) to biting his teacher (to check if humans would make a good source of food for Plonkers) and attempting to sacrifice a goat (he soon discovers what goats’ horns are for). Elina Braslina's playful, Quentin Blake-like illustrations bring Bumpfizzle's adventures on Earth delightfully to life. "The book was funny. It was very funny. … People who like books with cartoons, and who read Roald Dahl would probably like this book. I’d recommend it to my friend Brooke. You don’t know her." – Sienna (age 11) for the Dublin Inquirer