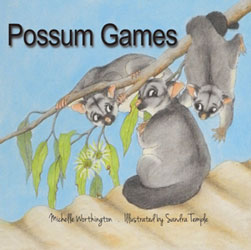 Late at night on a rusty tin roof, just near an old mango tree, the possums compete in games of skill and daring. Riley has always wanted to join in. He tries running, but he's not very fast. Then shot-put, but he can't throw the mangoes very far. Even volleyball isn't his thing, the watermelon ends up spattered on the sand when he tries to catch it. With the mangoes all gone and the trophies awarded, Riley sadly climbs back up his tree and dreams of better days. Until one particular noisy Possumwealth Games night, Riley discovers he has some amazing skills after all.